Our first attempts at Australian artist study went well. We did a McCubbin picture study using Lost. The kids took to it & did some great narrations.

Australian Picture study is still something we do in as part of our art lessons in the homeschool.
The following post is from my archives of September 2008 when we began a Fredrick McCubbin picture study.

This term I have started using picture study of Australian Artists. We have been having a great time. We’re following a three week study on our artists.
Our first artist was Fredrick McCubbin.
Our first picture was Lost. 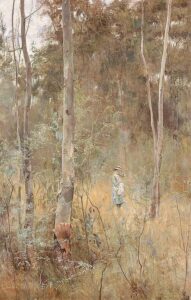 This is a novel way to do narrations.

Miss Six
This is a story about Lucy. Lucy was going on a walk in the bush. She got scared because she heard a noise that frightened her. She ran and when she stopped she was exhausted. Then she realised she was lost.

Master Eight
Once upon a time there was a boy and he got mad. He bashed his hand upon a big tree. He hurt his hand and hopped around in the bush holding his hand. He saw a gum tree. He tugged at the bark on the tree. And when he looked up he saw a girl that was blue and white with creamy pink skin. She was sad.

Miss Ten
A long time ago, well actually it was only four years ago, a little girl called Rebecca went on a bush walk with her big brother and some of his friends. They were faster runners than her, so she soon fell behind, so far that she couldn’t even see them, but she kept going further and further into the bush as fast as she could–trying to catch up with her brother. Suddenly she found out she was lost and her brother was nowhere to be found.
Little Rebecca started to cry. When she stopped crying she looked around and tried find the way she had come.
After some time she started to head in the direction trying to trace her footsteps. After she had been walking for about five minutes she remembered her family were picnicking near a big lake and all she had to do was find a stream and follow it and it would lead her to her family. What a smart little girl! Soon she found a little trickle of water and started to follow it. A while later little Rebecca heard the noise of a car. She quickly hid behind a tree and waited for the car to pass. She was scared they would be kidnappers. But what little Rebecca didn’t know was that they were park rangers and they could have taken her back to her family. Anyway the kidnappers made a better story to tell her family when she got home, if she ever got home.
Poor little Rebecca. She started to cry again, but then all of a sudden the stream got wider and then turned into a huge lake. And she saw her family eating lunch, they hadn’t even realised she was gone. A true story.

His another narration from Miss Ten

There was once a girl called Bonzoobuutey. Nobody liked her. Everybody hated her and her diet consisted mainly of small critters called worms. But this has nothing to do with the story so let’s move on. Once upon a tree there was some bark called Bubblegum Splint. He was a charming bark and everybody liked him except for Blackberry Bark. Which doesn’t surprise me because he didn’t really like any bark very much. So no bark liked Blackberry and he especially hated Bubblegum Splint. One fine morning Blackberry Bark was in an especially bad mood and he decided to make some mischief. He knew that Bubblegum couldn’t pass a chance to impress a lady. So he hatched a cunning plan. Every day the bush orcs came by and looked longingly at Blackberry’s fruit. Today Blackberry said to them, “I will give you all the fruit you want if you build a lady figure out of wood and bring her here.” So the bush orcs agreed, but they made the figure too big. In the end it looked like a pregnant lady but the Blackberry said it would be fine. So the bush orks moved it into the open. When Bubblegum saw her he did everything to try to make her look at him but she didn’t. He went off his tree trying to make her notice him. When she would not even stir in his direction he hung his head and there he remains till this day, a piece of bark shed from his-tree. Bubblegum Splint.